One of the exciting feature about ChineseLoveLinks.com is the “Who is interested in me?” If you have written a good headline, upload a good screenshot of yourself and constantly logging in, your chances of China girls showing an interest in you is high.

Look below for a screenshot of Chinese women showing an interest. For a conservative culture like China, the act of declaring an interest in opposite sex members only happen in online dating scene.

You can watch videos of Chinese women from your control panel but there is a catch; you have to be a paid platinum member. You can select the age range of the Chinese ladies members but you will be surprised that some pictures may appear older than their declared age.

Most of the Chinese girls in video gallery are young and sweet but there are also mature Chinese ladies looking for some love. These China girls live in various part of Chinese provinces and major cities like Guangdong Shaanxi, Beijing, Jiangsu, Sichuan, Zhejiang, Shanghai.

If you are looking for some exotic Asian online dating, ChineseLoveLinks is a good way to start and explore.

The influence of internet has drastically changed the dating landscape in conservative China.

With 1.4 billion people, affluent Chinese women who wants to expand their horizon tends to use online dating sites  to meet more people around the world. ChineseLoveLinks seek to fulfill this underserved Asian community.

ChineseLoveLinks is not mail order

If you are interested in looking to make friends and pen pals with REAL Chinese singles woman, then you might want to try. Let’s briefly go through the FREE registration process.

There are only three steps however some of the steps are extremely long winded and you may take up to 30 minutes to complete. The first step is to enter a valid email address. 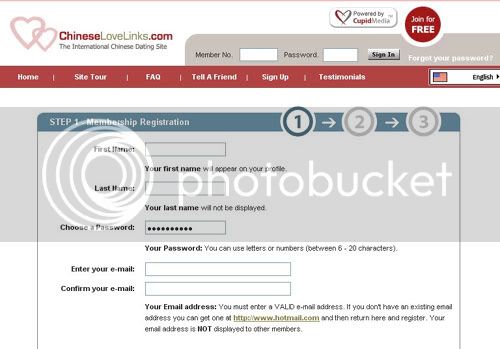 You will then been directed to step 2 where you will fill up some questions about yourself. This is pretty long and you cannot skip. You must make every selection or the system will not let you pass this step.

It is best to

In step #3, you will enter details about the Chinese singles you are looking for. It is best to leave them by default as you will have more chances of meeting Chinese penpals.

And finally you are done!

Here’s some information about Chinese ladies in ChineseLoveLinks.com. Most of them are from 24 – 45 years and these China girls hail from major cities such as Beijing, Chengdu, Sichuan Shenzhen, Guangdong Shanghai, Shenyang, Liaoning.

Do not expect to see young Chinese girls in ChineseLoveLinks.com.  You will be surprised that there are many Chinese women members who are above 30 years old.

Many are hoping to find new friends around the world and some of them are really seeking marriage partners.

With the increasing popularity of K-Pop Korean culture catching on, many people especially non-Korean women are willing to find out more about contemporary Korean culture. Sexy and seductive Korean actors in dramas whipped up amorous fantasies among women. This led to many Asian women hoping to find their ideal Korean lover.

If you are considering dating or marrying a Korean man, please read the following carefully:

Sorry to break your heart but these Koeran guys preferred the company of women who are of the same nationality. Due to the conservative cultural upbringing where they are less likely to be adventurous in relationships. Parental pressure also play a part which some parents have no tolerance for having a daughter in-law from different racial background.

There is a strong social pressure for them to get married early at the right age. So keep your eyes open when some of them who are over 30 years old comes along. Either he is going through some unusual circumstances or there is definitely something wrong with him.

Although there are always exceptions, Korean women tend not to avoid marrying divorced men or men living in rural areas as farmers. Venture at your own risk.

Here’s the shocking reality; Unlike those Korean actors where they are always seen as longing for true love, the majority of Korean males are prejudiced. That means that they are biased against people whose skin color are darker than them especially Southeast Asians who are generally darker than Koreans.

Myth #4. Korean men are gentle, kind yet sensitive with woman

Most of them are true (grab hold of these fine species) but there are always some black sheep.  They have a tendency to be very proud of themselves. Look out for those who are self centered and male chauvinist. You may want to keep your distance away from them.

Myth #5. You are dating/married to him only

If you are still brave enough for some online Korean dating adventure, please go to Korean Online Dating Reviews

In the member’s control panel, the layout is confusing although we have to admit that the features are power packed. You can use their sleek features such as chatroom, music, videos, forum and blog. Here’s a preview of member control panel.

You thought that you’ll be watching some videos of members making their introduction with their webcam. It was a such a letdown Why? There seems to be many videos about irrelevant subjects such as dancing and singing eg Britain got talent. Oh you’ll realized that these videos are grabbed from YOUTUBE.

There is a handy feature where you can see who are the most viewed ArabLoveLine members. Below are some examples.

You need to sign up as a Premium Membership in order to access the chatroom. The subscription  for 1-month is USD24.95. There are no demostration of any kind so you do not know what interface you will be using.

This is virtually non existant, you will be served as “SORRY No Results Are Found”. Probably a new site making progress.

The ratio of ArabLoveLine members are evenly distributed. 50% of the members are from USA and the rest came from Arabic countries such as Saudi Arabia, United Arab Emirates, Bahrain, Syria, Morocco etc. Interestingly there are also members from Muslims countries such as Malaysia, Indonesia seeking out Arabis singles.

At any point of time, you can only see less than 20 members online and you’ll be seriously wondering to yourself if ArabLoveLine is yet another bogus online dating site. Hopefully time will tell. If you have any successful experience with ArabLoveLine please share with us in the comments.

By comparing ArabLoveLine to ArabLounge, click here if you have not read our ArabLounge.com Review, we would definitely think ArabLounge is much more deserving of your time.

What is ArabLoveLine.com all about?

ArabLoveLine.com proclaims to be the top Arab online dating site for Arab singles to build real relationships. Let’s see if ArabLoveLine deliver what it promised.

Due to strict cultural restrictions, Arab women are discriminated from courtships and freedom of rights. Arranged marriages are a common sight in the Middle East (Muslim men and Muslim women). The lack of freedom to choose their own partners drove Arab men and women to Arab singles online dating sites to find their happiness.

Arab dating sites are more specific and they offer Arab singles many more choices than an arranged marriage would. They have complete freedom of choice and have a chance to get to know their potential partner.

Its easy to get started with the 3 step sign up process. #Step 1: Register your username and email address. Please remember what you have entered in the password column as you can login straight away after these three steps.

In step #2: you need to fill up a lot of data about yourself and ArabLoveLine even ask for your postal/ zip code. But if you are wary of privacy issues, you can skip most of the part as they are not mandatory.

In step #3: you are asked to upload a picture of yourself that is easily recognizable. But if you are in a hurry or can’t find a smiling photo of yourself, you can skip and press submit.

A simple search result in ArabLoveLine.com revealed “top rated” Arab singles women.  Most of them are of mixed arab descent that are living in the United States.

Here’s a tip for those interested in meeting arabic women: most of ArabLoveLine female members are cosmopolitan muslim women who wish to find an arab man that can swept their feet off!

In the next part 2, we will have a look into ArabLoveLine sleek features such as chatroom, music, videos, forum and blog