Online Thai Dating services such as ThaiLoveLinks.com are popular among foreign men who are seeking a relationship with Thailand ladies. However before you dive headlong into the Thai dating scene, there are some things you should be aware about some Thai ladies.

There are many reasons why a Thai girl would want to date a foreign western men. Here are some common reasons and you can decide whether she really like you as a person or there is some hidden motives.

Some Thai ladies find foreign culture interesting enough to hitch a foreign boyfriend to learn about their culture. Many Thai ladies benefit from exposure to the lifestyle of a foreigner due to his higher spending power. They can go to nice places for dining, entertainment and mix around with higher middle class.

In a way, beauty can be a curse as they can have the easy way out and they do not try to learn or develop themselves internally in substantive ways. Beauty is transient and superficial. It is better to find a Thai woman with average looks but with a kind heart rather than a  pretty “trophy wife” which you might regret later in life.

You need to have your head on the ground and the best way is use your common sense.

How to search for your perfect Filipino girl date

Before you embark on your journey to find your perfect Filipina woman match, you must first understand how Filipina women think and their dating culture. Please erase those misconceptions about Filipino women that you have read over the internet and stories told by expatriates.

Almost all Asian women not just Filipina women want to marry a man who can provide for her and a stable long lasting relationship. If you have read about those filipino girls targeting western men, then you have better stay clear of those gold-diggers.

filipino ladies from the the Phillippines

It is true that Filipino ladies perceived western men as more open and loving than native filipino men. However when it comes to marriage, a Filipina woman will seriously contemplate her future whether she is marrying a western man or a filipino man.

Filipino ladies perceived older western men as more mature, not a “player” or a heartbreaker compared to young hormone raging men. Moreover older western men should be already financially stable with college education. It is not a coincidence that most of foreign western men who are looking for a filipino wife are above the age of forty years old.

In reality, many Filipino women have advanced degrees of education and lead professional lives. With the widespread tales of adventures from some western men, you are misled into believing that a filipina woman’s only purpose in life is to fulfill some man’s wildest sexual fantasies.

Shortage of Chinese Women in China

During 2000 to 2010, the average gender ratio of newborn babies was 110 males to 118 females. There are 34 million more Chinese men than Chinese women in China. By 2020, 24 million young Chinese men may not find a marriage partner.

Why Chinese male babies are preferred

One of the common reasons why Chinese males are preferred is because of the social culture that having a son can carry on a family’s name. However the cost of bringing up a son in China is very high because Chinese men have to fork out large sum of money (one to two million yuan) to buy a house before they can marry their girlfriends.

Due to the three decades of China’s one-child policy, the widening gender gap may cause social issues. When there are more young Chinese males, Chinese women in the marriage market have the luxury of picking and choosing the most highly desirable men. This will leave those unwanted Chinese men without any marriage prospects. 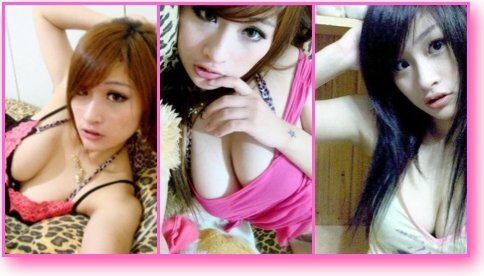 The potential for social tensions may be more rampant since millions of single young Chinese males have no chance of marrying a Chinese woman.

Chinese women in China have proven themselves to be valuable in the society, Chinese females in the cities such as Shanghai, Chengdu now match or even surpass men in their economic contribution to their family and the society.

Click below to find real young Chinese girls from China

ThaiLoveLines Instant Messenger is useful to open up your social life and gives you Realtime Chat and Audio/Visual communication. You can access this feature from various list menus such as “Whose Online Now” in the “This Session” panel in your Members Control Centre. However nothing comes for FREE, the opposite party and you must be a Premium Member.

First you have to upgrade to Premium member in order to enjoy one to one chat with Thailand girls.

In your Members Control Centre you can Thai women profiles that are currently online. You can initiate live Instant Chats with any member here by clicking the flasing “Who is Online” IM bubble. Both Standard members and Premium members can access these lists. 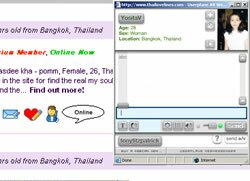