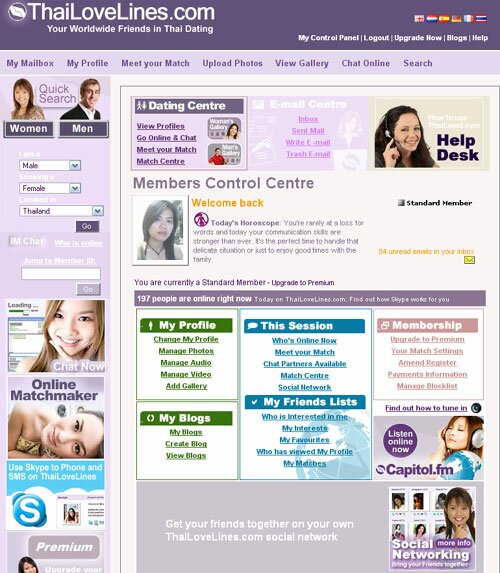 You can view ThaiLoveLines member profiles galleries just by clicking the search bar on your left or you can see under “Who’s Online Now” which is a much faster way. There are other modes of viewing which can really make your head spin like crazy:

To view any individual profile that you are interested just click on the member’s photo, name or ‘find out more’ option to open up the profile page. Here are some ThaiLoveLines’ free membership tools to make your online search for true love easier: 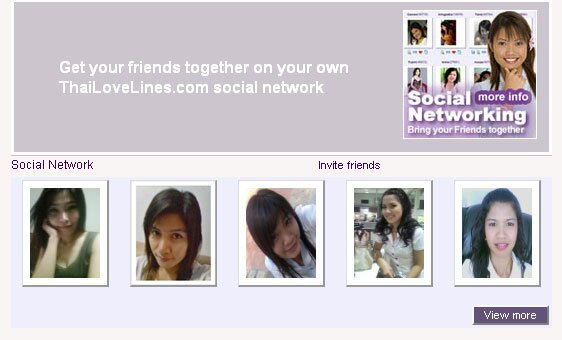 The most useful feature is the online chat function however unlike other Thai online dating sites, you need to upgrade to a Premium Membership so that you can do the following: Asian women in this case means those from southeast Asian countries like Thailand, Philippines, South Korea. We are not talking about educated Asian women who have live, work or study in western countries as they are more open-minded and less conservative.

It takes two to tango and it is fairly obvious to those who booked fully chaperoned marriage packages to Thailand, Philippines, visit a-go-go bars in  Phuket, Bangkok. The Thai girls and filipina women you attract are those who are looking for fat wallet / green card / marry for visa.

It is still relevant in this age, Asian especially women have been so deeply ingrained about foreign white men that they represent money and status.  For cosmopolitan countries like Hong Kong and Singapore, the stereotypical views are less apparent.

A polite word to describe this “phenomenon” is called respect otherwise it is known as prejudiced; putting white foreign men on the pedestal is the undeniable fact that is still running through Asian societies.

For those coming from poor and less educated families, there is a general belief about western men that they are all rich and they can live a luxury life once they catch one big fish. They want somebody reliable to take them away from squalor and poverty. Yes, not all Thailand women and filipina girls have such stereotypical views, at least not the affluent ones .

Skin colour seems to be an important factor especially in the Philippines. Most still have the perceived beliefs that if you have darker skin you come from a poor family where people earn a living by doing manual labor.

Korean culture dictates that the daughter-in-law must serve many obligations including doing things for her mother-in-law. It would seem enticing for a South Korean woman to get a foreign guy without being chained to the cultural shackles. Also South Korean ladies prefer exotic foreigner as they are perceived as more caring than Korean men.

Foreign white men especially Americans are easy going and laid back. Their relaxed and unreserved nonchalance clearly infused Thai ladies and filipina women with a sense of liberation which they could not find back in their own country.

Now you know why you are always mobbed when you are either a tourist or an exchange student in Thailand, The Philippines or South Korea.

But who will complain about their newfound popularity among Thai ladies, filipina women when they are given the cold shoulder by women back in their own country? 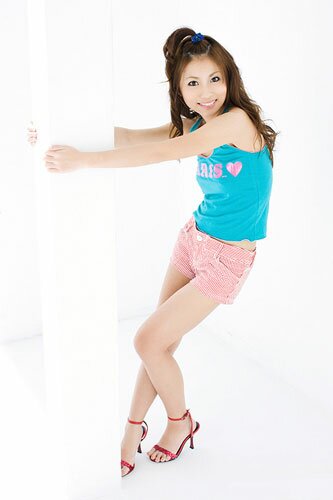 In this ThaiLoveLine Review, you will see how ThaiLoveLine’s Instant Messenger gives you realtime chat and audio video communication. What makes ThaiLoveLine stand out from the rest is that you can even chat on the phone for FREE using SKYPE with ThaiLoveLine online members.

With Chat Online you can view members who are available for IM Chat right now online and instantly connect with them for live chat, AV or even free phone calls. However this is a premium feature and you have to pay $19.99 for a one month membership. 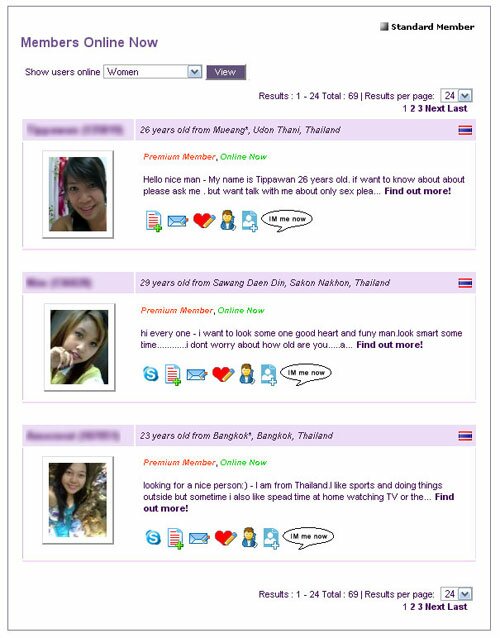 When you see the ‘I’m Online/Online’ balloon, simply click on it and you will be brought to pop up connection page.

It is important that you wait for the other person to ‘connect’ with you on the other side. You must type a message into the box to activate the connection for the opposite member. The system allows you to chat one to one with the other member, to see their photo and to click a button to view their profile as  if you are talking with them in person. Communicate live and make new friends instantly.

Click below to chat withThai women and Thailand girls Now