How to tell the difference between Chinese girls and Korean girls?

In the online dating scene, you will probably be looking at only pictures of Chinese girls or Korean girls. However most men from European countries might get easily confused between Chinese and Korean girls. They may all look the same and classified them as Asian women with slanted eyes.

You can easily tell apart between Chinese girls from China and native Korean girls from Korea. It’s mainly the facial structures but not necessarily the size and shape of  their eyes. Chinese and Korean girls can have small or big eyes.

Chinese girls are the most natural beauty and they preferred less make up while Korean girls are into cuteness and they are immaculately dolled up.

Interwining history of Korea and China

Koreans take pride in their country’s continuous survival against foreign invasions, however Korea was finally invaded by the Manchus in 1627 after which the Joseon dynasty recognized the suzerainty of the Qing dynasty of China.

Due to the closeness of the borders and past history of both countries, Korean culture was based on the philosophy of Confucian principles from China. Buddhism and the written Chinese script was brought to Korea by the Chinese.

“Chinese” actually includes a lot of different races and languages. Mandarin is the spoken language in China and there is only  one type of written language . The majority of ethnic group are Han Chinese.

To be honest, you can’t really tell. There are Chinese women who have big round eyes, some who have double eyelids, some doesn’t have slit/slanted eyes.

Most Chinese women have porcelain white complexion compared to Korean girls who are more tanned.

The majority of Korean girls don’t have natural double eyelids therefore it is very common for Korean women to have plastic surgery on their nose and eyes.

With the luxury brands such as GUCCI, Louis Vuitton established in China, Chinese girls from big cities such as  Beijing, Guangzhou are more affluent and are more likely to be dress well. However there are still plenty of Chinese girls from countryside who like to wear traditional cheongsam for their online profile pictures and many need a lot of catching up in their fashion sense.

Korean girls are more fashion forward and they are more likely to doll up with heavy makeup. Long fake eyelashes, pink glossy lipstick, curly brown or highlighted tresses are the norm.

To avoid generalizing and giving stereotypical answers, as individuals, Chinese girls and Korean girls are all different depending on their personality and culture influences.

Click below to find real Chinese girls from China

Scarcity of Chinese girls are a growing problem for Chinese men.  According to a study published online by the British Medical Journal, by year 2020 China will have increasingly more men than Chinese women of reproductive age.

Why is there a shortage of Chinese women?

There are two main reasons for the growing gender gap. China’s one child policy and the Chinese traditional preference for males are the two reasons why the China population gender balance are skewed. Baby boys  are highly regarded in a Chinese family because only the male can carry on the family name.

Parents are biased and in favor of a male offspring and the gender imbalance are caused by couples’ decisions to abort female fetuses. In 2005  census study, births of boys in China exceeded births of girls by more than 1.1 million.

The normal male-female ratio of a country should be between 103-107 for every 100 females.  In China, the figure has reached 116 boys for every 100 Chinese girls with as many as 140 Chinese boys in the rural areas.

You could imagine the worst case scenarios; rising crimes against Chinese ladies such as kidnapping and rape. However Chinese men are already taking evasive actions. Chinese men are actively looking for foreign brides, marrying much younger Chinese girls or older Chinese women.

Where to find Chinese women online?

There are a number of online dating services that specifically cater to Chinese and Asian women singles. Below are some Chinese online dating websites.

How to have a successful online relationship with Chinese women

How to have a happy ending with Chinese women and make it work? Below are some useful tips that can help you gain headstart out of the cross-cultural relationship.

It’s better to be well prepared with some knowledge of Chinese culture and their values. You will never want to turn off a Chinese lady with your behavior or with your words unintentionally.  Chinese women has a certain views and expectation towards a marriage.

Tip #2: How to bridge the cultural gap

Communicating with a Chinese women is important as there is always the language barrier. Do not depend too much on translators or online translation as some of the meanings will be lost through translation service. It is at your best interests to pick up some basic Chinese converstion phrases. This will show that you are committed and leave a Chinese woman a good impression.

You should not simply sit back and let things happen. Chinese woman likes a man to be in control and by spending sometime to get to know her, you are showing a Chinese lady that you are making a commitment to yourself and her own happiness.

Starting a cross cultural relationship with someone from another faraway country can be very exciting but you have to use your own judgement and common sense.

Why Chinese Women Are Attractive

Finding a Chinese woman as your ideal companion? Chinese women may be a bit different from Western ladies. Here are some facts you should know about Chinese women that makes them an ideal marriage partner. 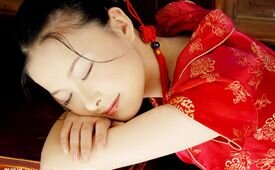 Chinese women are more cautious about talking and meeting strangers in Chinese online dating services. They are shy in communication and preferred to be more passive and reserved. Straight talking is a convern as they do not want to be seen as brash and inconsiderate.

In fact, Chinese women are very loyal and faithful to their husband and families.  Show your sincerity by talking about she does in daily life, her difficulty in work and her family. When a Chinese woman feels that you care and sincere about her, she will think that you are the best choice for her.

Chinese women are gentle and considerate

Chinese women are always willing to share their partner’s pressure and sorrow. If you are having difficulty or trouble in life and work, do not be afraid to share your grievances. Chinese woman is more than happy to give you a listening ear and ready to give you encouragement, comfort and support.

By sharing your troubles, Chinese women do not see it as a weakness. Rather they perceive it as an honor to be able to shoulder and share your burdens.

Chinese women are virtuous and tolerant

Chinese women are very courteous, feminine and tolerant. She does not quarrel with you over trivial matter. In general, she can easily appease your anger whenever there is a misunderstanding.

However being tolerant doesn’t mean she will turn a blind eye to your frivolous behaviors, like every woman in this world she will also get jealous.

click below to find your ideal Chinese woman lovers

Why Chinese women are attractive

With the increased number of Chinese internet users, you will find more Chinese ladies turning to internet for dating, friendship or relationship. The search for exotic love is not all plain sailing as you have to navigate through the treacherous water of Chinese online dating services and some over zealous Chinese women.

Chinese ladies are generally physically attractive and usually slender because of Asian diet. As in a Chinese traditional family, Chinese women are treated as homemaker where the men will be the sole breadwinner.

Chinese women knows how to take care of their men unlike western women who are more independent. Chinese girls tend to speak softly and their gentle demeanor makes them very charming.

Chinese woman are extremely faithful and devoted to their partner once the relationship is established. The reason is because the sense of shame is too immense for them to become a flirt.

There are always some who has ulterior motives who proclaimes to ‘love’ you but for your wallet and your bank account.

However a Chinese woman really appreciates western men because of the politeness and respect that they received, something they do not often get from Chinese men.  Chinese girls also love being equal partners in their inter racial relationships.

There is a ready pool of singles looking for dating from China. ChineseLoveLinks includes numerous chat services where members will surely find Chinese women for marriage, a Chinese girl friend and most importantly start a lasting loving relationship with their selected Chinese singles.